Sound Behavior Troupe is the brainchild of guitarist and composer Paul Kelley.  Though the band has described their sound as San Francisco beatnik music that also blends in 1960’s and early 1980’s punk influences from that region, it’s more succinctly described as jazz with distorted rock guitar.  Expanding on that definition would also go so far as to include elements of fusion and funk.  In many ways their 2015 EP, Get Active Or Get Radioactive, is reminiscent of early King Crimson given the use of jazz percussion, saxophone, and rock guitar.  The five tracks (actually four and a small coda) are all instrumental pieces that are performed exceptionally well by Kelley and his backing musicians.  Although the record isn’t “out there” enough to be considered experimental, the harsh guitars can sound out of place in the otherwise primarily jazz arrangements.  The end result of this is an album that will thrill some, but turn away others.

“Evolve Or Die” begins the experience with the sound of an aerial bombardment that goes towards satisfying a loose anti-war theme.  Brisk drumming begins right after the bomb drops and is quickly accompanied by a fantastic bass part and a layering of guitars.  The rhythm guitar which is effectively lead number one sets up a strong melody while the second plays over everything in very raw fashion.  Both guitars play in separate stereo channels and their tones are vastly different.  The rawness of the second guitar is what may be off putting to some since it’s not something you’d be used to hearing in jazz but it’s played incredibly well.  The jazz feel is even more firmly established with the inclusion of the saxophone, which again, may not contrast well with the guitar depending on your ear, but this was a sonic dissonance that was also done very well by the aforementioned King Crimson.

The following piece, “Wheels of Life” rolls out another heavy bassline and a whirring guitar sound.  Being virtually double the length of the previous track, there’s a lot more this piece accomplishes, in particular how it shifts pace partway through.  Though hardly a slow song to begin with it becomes very lively and quick with the drum track really opening up.  The sax drops in volume but increases in speed while the guitar shreds away.

The centerpiece of the album is the nine minute “Increase The Energetic Throughput.”  The first two minutes are noteworthy for the double layering of saxophone and the slow but sure bass groove that follows it.  After this period the music erupts with power and the lead guitar finally comes in to whir away.  The sax keeps going strong, the drum fills crash down, and about halfway through the guitar goes into a fairly intense solo.  The next big change comes in after six minutes when the lead takes a step back and the bass comes to the forefront with the sax.  The drums fall back into softer snare work and heavier emphasis on the hi-hat and cymbals in order to let the bass fill the sound.  Eventually the full arrangement comes back to round things out.  It’s a bit overly long as it feels like there are some moments where the song is just repeating itself, but overall it’s a well-crafted and performed piece of music.

The album’s last actual song is “Ego, Sex, Money & Power.”  It changes things up quite a bit by being a shorter piece and opening with a distinct ‘70s style guitar riff.  This time when the bass enters into the mix it’s a vastly different funk sound.  The lead guitar tone is a bit different as well, often eschewing the raw sound for a chiming quality that is otherwise unheard on the record.  There’s also quite a bit less saxophone here, only coming in bursts instead of playing a steady melody.  While it’s not quite as intense as what came before it, it does successfully vary up the sound of the album, and for that it deserves credit.

In order to try and tie the anti-war theme together (something indicated more by the song titles than the music itself) a short little burst of music followed by an explosion caps the project.  “District of Criminals” would be worth more mention if the message of Get Active Or Get Radioactive actually played a role in the music itself, but at least the instrumental prowess of the four proceeding songs is staggering.  Sound Behavior Troupe and Paul Kelley have constructed a tight EP that should appeal strongly to jazz fusion fans, and if you enjoy early King Crimson it’s certainly worth a listen.  The blending of jazz and punk inspired guitar won’t captivate everyone, but it’s well implemented regardless. Explosions may bookend the album, but it’s the content in-between that provides the real boom. 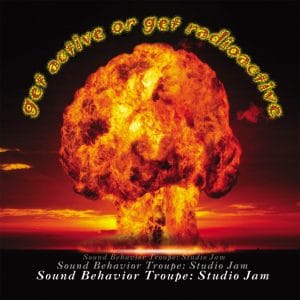 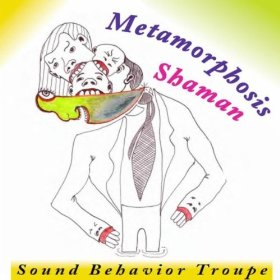 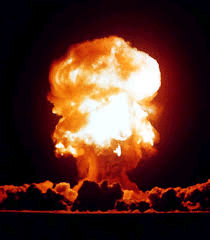